Spectacular performances of music, pageantry and dance celebrating those in uniform.

The Greater Cleveland Peace Officers Memorial Society® has canceled the 2020 Tattoo, which had been scheduled to take place May 16, 2020. Stay tuned for 2021 details, and we’ll see you there next year!

Throughout European military history, musicians would march out from barracks at the end of the day to play signals and alert troops to return home before the castle gates were locked for the night. In the 17th Century, when these musicians called the soldiers to retire, the Dutch phrase “doe den tap toe” or “shut off the taps” could often be heard in the village pubs of Holland and Flanders. As these nightly occurrences became popular sources of entertainment to the villagers, they also became evermore elaborate. This popular tradition of public musical and drill displays evolved into the modern-day tattoo, condensed from “tap toe,” much like the solemn tune Taps. 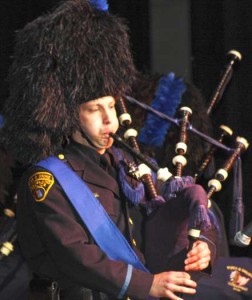 We invite you to enjoy the displays of marching, music, dance, and song by the finest men and women from across North America, and join with our international community in remembering the fallen heroes who have returned home for the final call. The entire community joins together in remembrance, fellowship and celebration to salute our safety forces, our military and our country.

The Tattoo is open to everyone, we especially welcome families of all ages.

The premier event of each year’s commemoration is the Cleveland International Tattoo. In the time-honored tradition of the military tattoo, the pipes & drums of numerous police departments throughout the United States and Canada, as well as marching bands, drill teams, dance and choral groups, combine their talents in a spectacular display of pageantry and music. The entire community joins together in remembrance, fellowship and celebration to salute our safety forces, our military and our country. 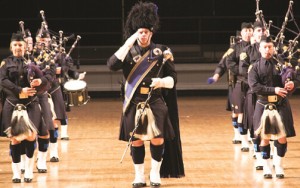 This family friendly, patriotic concert highlights the best musicians, dancers and performers from across the globe. Past performers include police, military, and children’s groups from the United States, Canada, Ireland, Italy, Scotland, Turkey, Australia, Ukraine, Poland and Greece. 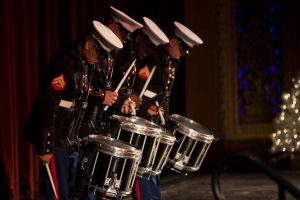 All members of the band are trained riflemen and fulfill Corps-wide physical fitness and combat training requirements, just like any other active duty Marines. The band is prepared to “Fight Tonight” and can be called upon to provide security, both domestically and overseas, by order of Marine Forces Reserve. 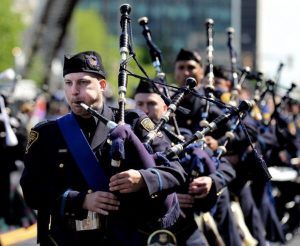 The Pipes and Drums of the Cleveland Police

THE PIPES AND DRUMS OF THE CLEVELAND POLICE
The Pipes and Drums of the Cleveland Police, formed in 1996, serves as the musical component of the Ceremonial Team representing the Division and the law enforcement community of Greater Cleveland at ceremonial events, parades, and civic functions. The band has performed throughout northeast Ohio, United States, Canada and Ireland. Sadly, in its short history their members have rendered final honors to over 100 law enforcement officers who have died in the line of duty, and over twenty-five U.S. military personnel who made the ultimate sacrifice in defense of our country.

ADDITIONAL ACTS TO BE ANNOUNCED

This family friendly event will entertain and amaze your group. Unique performances by police pipe and drum bands are just the beginning. The show also includes ethnic dancers, choral groups and traditional bands.

For questions about the show, please call 216-337-3537 to speak with a CIT planning committee member.

You Can Help Us "Keep The Promise." END_OF_DOCUMENT_TOKEN_TO_BE_REPLACED