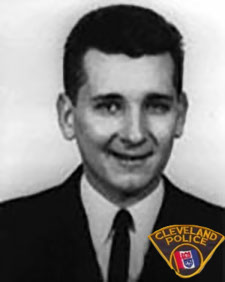 John Apanites Jr. became a Cleveland patrolman at the age of twenty-five and was the son of Cleveland Police Lieutenant John E. Apanites. He resigned from the police force to become an F.B.I agent returning to the police department after six months.

John attended John Carroll University while working for the East Cleveland Police Department and after graduation, he enlisted in the Marines. After service with the Marines, John married his wife Jacqueline and they had two children.

On April 7 1969 at about 7:45 pm, Detective John R. Apanites Jr. was killed and another patrolman was seriously wounded by a suspected shoplifter at Petrie’s Dress Shop on 322 Euclid Avenue.

John Apanites and Patrolman John McNamara were working as plainclothes guards at Petrie’s when they stopped 26 year old Joseph McDonald and a woman whom they suspected of trying to steal a jacket. While the four of them were in a stockroom waiting to call for a police cruiser, a scuffle ensued at which time McDonald and the police fired their weapons. The officers fell and McDonald ran from the store and boarded a bus. Two of Petrie’s female employees followed the suspect and flagged down Scooter Patrolman, Walter D. Thornton who boarded the bus and captured McDonald, who had been wounded in the melee.

John Apanites died at the scene and Patrolman McNamara was hospitalized. McDonald and his female companion were also hospitalized.

McDonald was tried on three counts, found guilty and sentenced to the electric chair. His sentence was later changed to serve life in prison. Over the years, McDonald has appealed for parole and has been denied upon each appearance.

You Can Help Us "Keep The Promise." END_OF_DOCUMENT_TOKEN_TO_BE_REPLACED