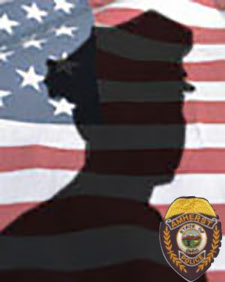 In the early 20th Century, the Village of Amherst was a place to get away from the congestion of city life in Cleveland. The well-to-do would come and stay at the Amherst Hotel and enjoy the serenity of the area.

The position of Village Constable was an elected position in 1913. Rupert Becker ran for this office and lost. He was later appointed as a Special Police Officer and Night Watchman some time between the election and 1914.

Amherst was also an oasis for the many laborers who worked the sandstone quarries outside of the village. On April 3, 1916 Rupert Becker would encounter one of these men.

On that date, at approximately 9 p.m., Rupert Becker was summoned by Marshall Miller to Church St. to discuss a problem with a quarry worker, Martin Bischoff. Bischoff had an argument earlier in the evening with another bar patron. Marshall Miller learned Bischoff bought a .32-caliber revolver and ammunition from the local hardware store after the incident.

While advising Rupert Becker and Constable Fields, Bischoff exited a bar from across the street with the gun in his hand. Marshall Miller yelled out for him to put the gun away. Bischoff then raised the pistol and began shooting at the officers. Watchman Becker was shot four times, sustaining wounds to his back, hips, and arms. Marshal Miller and Constable Fields were also wounded during the attack, but survived. Bischoff was apprehended several minutes later after running from the scene.

Rupert Becker succumbed to his wounds on April 10, 1916. He was survived by his wife Katherine and son Peter A. Becker.

You Can Help Us "Keep The Promise." END_OF_DOCUMENT_TOKEN_TO_BE_REPLACED