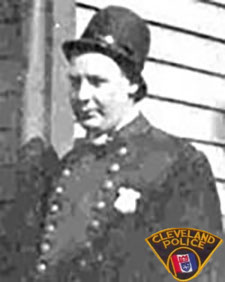 “On November 11, 1912, Albert H. Block was appointed to the Cleveland Police Department. One cold Thursday night, Patrolman Block and Patrolman Callan, both of the vice squad were investigating a gambling in progress complaint at a club on E. 6th and St. Clair.

Officer Callan entered the premises while Officer Block climbed a ladder to look through a second story newspaper covered window at the font of the building. When a search was completed, no law were violations found.

Officer Callan came out of the building he found his partner, Officer Block lying at the foot of the ladder in a pool of blood with a severe head injury. It was unknown if officer Block fell or was pushed 10 feet to the sidewalk.

Officer Block was taken to Lakeside Hospital, where he died Friday morning. Cause of death was a fractured skull and brain hemorrhage. The Cleveland News reported the rungs on the ladder had been ice-coated that night. No proof was ever obtained sufficient to warrant a charge of homicide.

You Can Help Us "Keep The Promise." END_OF_DOCUMENT_TOKEN_TO_BE_REPLACED