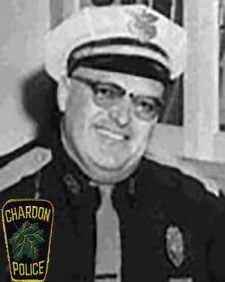 Tuesday, October 25, 1966, was to be Police Chief John Bohl’s last day on the job. His workday began very much the same way it had during his twenty year career as Chardon’s Police Chief. He was at the police station by 8:00 a.m. and left shortly thereafter for a hearing in Juvenile Court. Afterwards, he made a scheduled visit to Chardon High School and later gave two separate talks to children at St. Mary’s School.

At 4:15 p.m. that afternoon, the Chardon Police Chief learned of a serious motor vehicle accident on U.S. Route 6 just west of the village limits, and he responded to help.

The fifty-one year old chief was a man highly respected in the community where he had served since 1946. He began his law enforcement career as the town marshal of New Matamoras near the City of Marietta, Ohio, during the 1930’s. When World War II began, he joined the plant guard force at the Ravenna Arsenal. At war’s end, he joined the Ravenna Police Department. After a brief period of time there and expressing a desire “”to be on his own a little more””, he accepted the position of Police Chief for the village of three thousand.

Chief Bohl developed a fine reputation in Chardon, both as a police officer and as a role model for the children in the community. He was always spending time talking to youngsters, especially those he suspected were headed for trouble. He was legendary in his commitment to work with children. In addition to being Police Chief, he was active in the village’s volunteer fire department and held the position of Captain. He was very active in many local groups and state organizations. He served as President for F.O.P. Lodge #16 in Lake and Geauga Counties.

When he arrived on the scene, he discovered the crash had involved two vehicles that had collided head-on with one another. Five passengers in the vehicles were dead at the scene. A sixth died later at the hospital. Five others were injured. While assisting at the accident scene, Chief Bohl was stricken with a heart attack. Efforts to revive him by other officers on the scene were not successful.

The entire local community was deeply touched by the Chief’s sudden passing. Tributes came from near and far. A memorial fountain was erected in the Village Square to honor him. Even fate had respect for this dutiful officer. He died with his boots on, the way he would have chosen to go if he had a choice.

You Can Help Us "Keep The Promise." END_OF_DOCUMENT_TOKEN_TO_BE_REPLACED