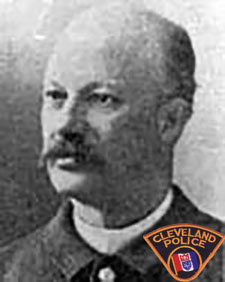 On November 27, 1912, at 10:10 pm, Patrolman Leroy E. Bouker of Cleveland’s Second Precinct was shot and killed as he attempted to capture three men who just robbed William S. Bracken’s meat market at 1648 St. Clair Avenue. Patrolman Bouker was the 11th Cleveland Police Officer killed in the line of duty.

The hold-up men shot the clerk in the meat market and Bouker, who heard the shots approached the three suspects as they were leaving the market and getting into a car driven by a chauffeur. During the hold up, a fourth suspect remained in the car with the chauffeur. Bouker drew his gun and ordered the suspects to stop. Ignoring Bouker’s order, they drew their guns and shot at Bouker. Bouker was struck in the head and chest by three of the shots and fell to the ground.

Patrons from Richard O’Connor’s saloon at East 17th and St. Clair helped the wounded patrolman into the saloon where he died minutes later.

The auto used in the hold up had been hired from the City Auto Livery Company on E. 9th Street and was driven by a chauffeur. The chauffeur later told police he was forced at gunpoint to drive before and after the robbery.
The chauffeur also told police the hold-up men ordered him to drive to West 38th and Clark after the robbery. On the way, two of the gunmen exited in the 38th and Bridge area and the remaining two exited at 38th and Clark. The chauffeur stated the gunmen paid three dollars for the use of the car.

Services for Patrolman Bouker were held on November 30, 1912, at 2:00 p.m.at his home on 1440 West 74th Street and Reverend Dan F. Bradley of the Pilgrim Congregational Church officiated. A detail of policemen, members of the Lake Shore K of P, many friends and police retirees were in attendance.

The funeral procession was escorted to Lorain Avenue and West 73rd Street by police squad with six Cleveland Policemen as pallbearers walking beside the hearse. At 73rd and Lorain the cortege proceeded in carriages the remainder of the way to Brooklyn Heights cemetery where Patrolman Bouker was buried. Bouker was survived by his wife, Caroline, sons H.L., Clarence and Frank H. Bouker, daughters, Delia and Helen Bouker.
Offenders, James Kelly, Edward Gallagher and Edward McNamara were apprehended in Buffalo, New York and were returned to Cleveland on December 19, 1912. The three pled guilty to second degree murder on February 19, 1913.
The fourth suspect, James Meaney, was apprehended in Indianapolis, Indiana, and returned to Cleveland on October 29, 1913 and convicted of second degree murder.

You Can Help Us "Keep The Promise." END_OF_DOCUMENT_TOKEN_TO_BE_REPLACED