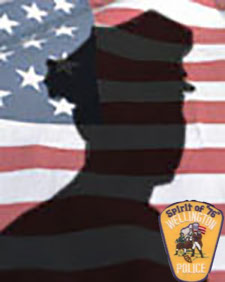 On the late evening of July 17, 1883 Wellington Marshal George Brenner was made aware of suspicious men in the area of Houghtons Drug store. Marshal Brenner watched the men from Footes Stable and saw them enter the alley behind the Union Block. Brenner first returned to his nearby apartment to exchange his slippers for his boots then left to attempt an arrest. Followed by his wife, who was concerned for his safety, Brenner entered the alley from the opposite end. The next thing heard was the shooting near the C.C.C. & I Freight Depot.

At about 12:05 am on Tuesday, July 18, 1883 Marshal Brenner was heard by his wife to shout, “I am shot”. She ran to his aid and was able to help him back to their apartment above the Otterbacher Harness Shop. Brenner was helped into bed and told his wife “He had got to die” and to “Go for a doctor”. He had time only to bid his family goodbye and was dead. The shot had pierced his neck, ranged downward, and lodged in his chest.

Word was spread by telegraph, telephone, men on horseback and men on foot that the Marshal had been shot by tramps. By daybreak John Young, 29, was caught. While going through Footes Livery, Young tried to secrete a revolver in the hay mound. When questioned, Young admitted he was one of the gang but charged that another did the shooting. Young told that he and his partner had just burglarized the near-by office of the W. & L.E. Railroad Depot when Marshal Brenner saw them. As Marshal Brenner approached, he was shot by August B. Tiery.

August Tiery, 19, of Terre Haute, Ind., was later captured in a boxcar at Kipton, Ohio and brought back to Wellington in an open carriage by the Marshal of Oberlin, Ohio. Though driven rapidly to the lockup, it was feared that Tiery might be taken from the officers and punished without formality.

The Wellington Enterprise later reported “The excitement was most intense and it would need but little encouragement to secure swift justice for the whole gang from the arm of a telegraph pole.”

Convicted of second degree murder Tiery was sentenced to life in prison December 20, 1883. On March 23, 1895 Tiery set fire to his bed and died in prison, of burns. Young received a five-year prison sentence.

Submitted by: Al Leiby, Detective (Ret.) Elyria Police Department, based on newspaper reports of the incident..

You Can Help Us "Keep The Promise." END_OF_DOCUMENT_TOKEN_TO_BE_REPLACED