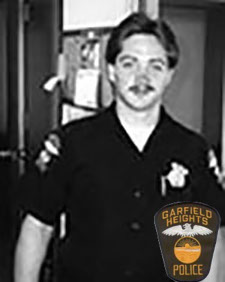 December 8, 1994, is the day that will be forever remembered and never forgotten. December 8, 1994, was the day when officers Stefanov and Brown were killed in an accident while in a high speed vehicle pursuit. Not only were two excellent officers lost, but fine respected men are now gone.

Mike’s IQ score placed him in the Genius category. Mike could have chosen any profession, but he chose to serve the public and became a Police Officer. Mike’s intelligence and wit developed him into an excellent officer after only 4 years on the job. If Mike wasn’t the first responding car on a call, you could bet he would be the first to back you up. Mike had a genuine love for his fellow officers with our department as well as any other. He respected the badge and was honored to wear it.

Mike and I had become best of friends while working on the same shift for nearly 3 years. It was Mike’s personality and attitude that really made him stand out in a crowd. Mike was known by his fellow officers as a practical joker and a true wise-cracker, but he had the gift of doing it in good taste. Mike was dedicated to doing his job and making sure he was in shape by exercising, no matter what time or what day it was.

Outside of the job, Mike was well known for lending out his Izuzu pick-up. If you needed something moved, Mike would be the first to volunteer and never complained. Mike always placed his friend’s and family’s concerns in front of his own. Mike was always at his best when helping others. Even if you were in a bad mood, Mike would make it his mission to make you smile.

Mike left a city full of friends and memories, but the one person Mike cared for the most was his 7 year old daughter Ericka. To see Mike with Ericka and to observe him give her 100% of his attention was amazing. Mike always spoke of how proud he was to be her father and how proud he was to have Ericka as his daughter.

I always looked forward to working a two-man unit with Mike because we were so compatible, but I will never again have this opportunity. The city of Garfield Heights has lost an excellent young patrolman, and his uniqueness can never and will never be replaced.

You Can Help Us "Keep The Promise." END_OF_DOCUMENT_TOKEN_TO_BE_REPLACED