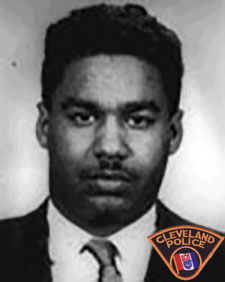 On October 13, 1968, Patrolman Buckner was assigned to escort the fire trucks from the station at East 105th Street and Superior Avenue on all runs. This detail was set up because fire department personnel had come under attack with rocks and bottles as well as gunfire connected with the riots that had taken place during the summer months.

At 12:30 a.m. that day, Patrolman Buckner, riding a police motorscooter, was escorting the fire trucks on East 105th Street enroute to a call. One of the fire engines swerved to the left to avoid an open manhole. This action caused Buckner to swerve further left to avoid the fire engine. Buckner’s scooter hit a parked truck and a second vehicle, throwing the officer to the pavement.

Patrolman Roy Buckner was taken to Mt. Sinai Hospital, where he died of his injures on November 11, 1968.

You Can Help Us "Keep The Promise." END_OF_DOCUMENT_TOKEN_TO_BE_REPLACED