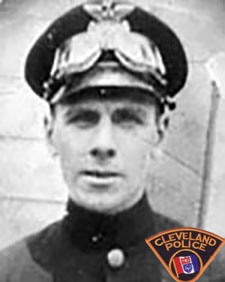 Detective Edward Butler was appointed to the Cleveland Police Department on June 1, 1924. Before joining the police force, Detective Butler was a patrolman for four years in the City of Shaker Heights.

On November 2, 1929, around 6:30 pm, Sergeant Emil Ziegler and his squad were called to 6106 Quincy Avenue by Mrs. Triplett, who feared her husband, Robert was going to kill her for leaving him the day before. When Ziegler and his men arrived at the Quincy Avenue tailor shop they were met by the proprietor, George Chapman, seamstress, Jimmie Lee Clemes, and delivery boy Willie Nunery.

They had not heard of anything going on in the neighborhood so Ziegler went next door to phone headquarters while Detectives Butler and Clark walked down the sidewalk in front of the tailor shop.

As they walked, they spotted a man later learned being, Robert Triplett leaning against a pole with his hands in his pockets. When they asked what he had in his pockets, the man did not respond. As Butler proceeded to “frisk” him, the man brushed him off and pulled a revolver from his pocket. The man ran towards the front door of the tailor shop and Butler ran after him. As they struggled in front of hundreds of shoppers, Triplett got away and shot at Clark but missed. Clark returned fire but also missed. Triplett ran into the tailor shop and into an alcove with Butler following. Detective Clark heard two shots followed by Butler yelling, “He got me!” Ziegler heard the gun fire from next door and entered the store with a shotgun. Clark and Zielger heard Butler and Triplett struggling.

They heard Butler yell, “Look out! He’s got my gun.” Triplett stuck his head out of the curtain and fired at Clark. Ziegler shot at Triplett with the shotgun then went to check on Butler. A bullet whizzed through his trouser leg and he turned to see Triplett firing, Ziegler returned by emptying his revolver at Triplett.

Butler was in critical condition at Charity Hospital. Blood was needed when they performed surgery and the response was overwhelming. Unfortunately, the surgery was unsuccessful and Butler succumbed to his injuries the day after.

Triplett was known as the “Chicago Killer.” He was wanted for murdering his previous wife and girlfriend and was believed he would have murdered his present wife. Response time for officers to the crime scene was aided by radios that had been installed in the squad cars. After seeing how successful they were, the entire force was equipped with radios in their cars.

Detective Butler resided at 3340 West 17th Street in Cleveland and was survived by his wife Elizabeth and twenty- month-old daughter Lois.

His funeral was held on Wednesday, November 9, 1929, at Blessed Sacrament Church on Trowbridge and Fulton. The funeral procession started at Butler’s home and included members of Council No. 733, Knights of Columbus to which Butler had belonged. A gold badge was posted in a case located on the landing of Central Station that represents Butler’s heroic achievements.

You Can Help Us "Keep The Promise." END_OF_DOCUMENT_TOKEN_TO_BE_REPLACED