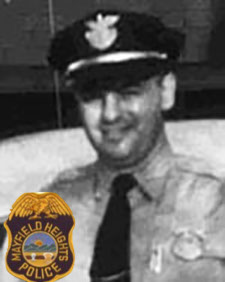 A policeman’s job is governed by chance and the unexpected. He never knows from one moment to the next where duty will take him or what the consequences may be.

Patrolman Catalano was simply responding to a burglar alarm at the Eastgate Shopping Center located at the Mayfield Road-SOM Center Road intersection when he met his death. The bank alarm turned out to be accidental. Witnesses said the Officer was going east on Mayfield Road with sirens blasting and the red lights on his cruiser flashing when he crossed the intersection, apparently against a red light and was struck by a southbound car. Officer Catalano was pronounced dead at Huron Road Hospital. The driver of the other car sustained serious head injuries.

A good policeman, one described as “devoted to his duty”, Catalano had turned on his siren and the flashers above his car to warn drivers he was coming. The wail of the siren went unheard by the driver of the other car. He was a deaf mute. This fact stirred up discussion of the state’s licensing practice regarding deaf mutes.

You Can Help Us "Keep The Promise." END_OF_DOCUMENT_TOKEN_TO_BE_REPLACED