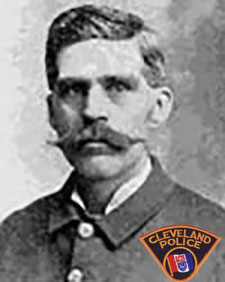 Patrolman Walter C. Chapman was appointed to the Cleveland Police Department on June 19, 1886, and was considered by his fellow officers to be a well-liked officer. Chapman was assigned to the Fifth Precinct but had been recently transferred to the Third Precinct to work strike duty for the garment worker’s strike.

The fatal shooting occurred in Decatur Alley located to the rear of 2237 Orange Avenue. After being shot, Chapman fell to the ground and died in the dark alley a few feet away from the rear of the Perry Theater. Conditions at the scene indicated that Chapman had been taken completely by surprise and had been shot down before he could draw his weapon.

On the night of the shooting Chapman and his partner, Patrolman Robert Clark, were assigned to duty in the area of Decatur Alley to guard a number of women who were employed at the various cloak factories from harm at the hands of strike sympathizers. The alley had been the scene of several recent disturbances and was being watched closely by police. Upon hearing shots, two nearby policemen, Patrolmen Clark and Manning, rushed to the scene and found Chapman’s body. Patrolman Manning ran around the corner to Louis Cohen’s Saloon at 2135 Woodland where he called for an ambulance and notified headquarters of the murder.

Later examination of the body revealed that only one of five shots fired struck Chapman. Unfortunately, that one bullet had pierced his heart. The Cleveland Garment Manufacturer’s Union offered a thousand dollar reward for information leading to the arrest of the murderer.

On June 19, 1911, Patrolman Chapman had completed 25 years of service as a Cleveland Policeman. Although eligible for retirement, he never gave a hint to fellow officers that he was considering retirement. Chapman was the ninth Cleveland Policeman killed in the line of duty. His murderer was never apprehended.

Patrolman Walter C. Chapman was buried on Saturday, August 26, 1911, at 2:00 p.m. Services were held at his late residence, 2321 E. 89th Street, Cleveland. Internment was at Lakeview Cemetery. He was survived by his wife, Emma. It is not known if Chapman was survived by any children. (Accounts were taken from the Cleveland Plain Dealer.)

You Can Help Us "Keep The Promise." END_OF_DOCUMENT_TOKEN_TO_BE_REPLACED