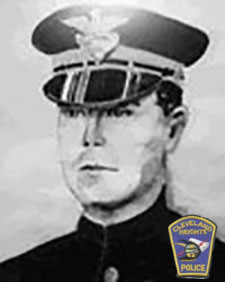 On Thursday, September 2, 1920 at 3:00 a.m. Patrolman Ralph W. Newnes notified Captain Connolly at the police station his discovery of burglars in the basement of the Miller Drug Company store at 2135 Cedar Road. Captain Connolly and several patrolmen returned to the scene and surrounded the building.

Officer Newnes, a new member of the force walked into the alley, saw a figure and fired. The Captain fell, shot in the right side. At the time, Newnes thought he mistakenly shot the Captain and wasn’t until later that Chief William G. Barrows determined a burglar in the alley between Newnes and Captain Connolly fired the shot . Patrolman Newnes was unable to recall how many shots were fired during the chase and ultimately Newnes was totally exonerated.

Mt. Sinai Hospital physicians operated but failed to find the bullet which struck the Captain in the abdomen.

Captain Connolly died on September 8, 1920 in the hospital. Burial was at Riverside Cemetary. The Captain was survived by his wife, Rose. (No further details were found in the Plain Dealer dated September 3, 1920 or from police reports.)

You Can Help Us "Keep The Promise." END_OF_DOCUMENT_TOKEN_TO_BE_REPLACED