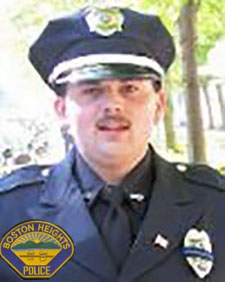 On Monday, January 19, 2009 at 5:30am, 24-year old officer Jarod M. Dean was struck and killed by a truck while clearing debris from the roadway on state route 8 in the Village of Boston Heights.

While on patrol, Dean came upon debris in the left lane between Hines Hill Road and Boston Mills Road. He positioned his cruiser in the roadway with the overhead flashers activated and notified dispatch of his intentions on removing the debris. At approximately 5:30am, Officer Dean was struck by a truck traveling in the southbound lane. He was pronounced dead at the scene.

Jarod M. Dean was born in Slavic Village, a neighborhood on the southeast side of Cleveland, Ohio. He returned there often even after his family moved to Hudson, Ohio in 1998. As a student of St. Stanislaus School, he often spoke with his teachers about fulfilling his longtime dream of becoming a police officer. Father Michael Surufka of St. Stanislaus Church commented that even as a youngster, he contributed to the church community as a server at Mass.

As a Boston Heights Police Officer, Jarod dedicated his time to making sure he fulfilled his duties. He wanted nothing more than to make sure his Chief knew he was doing the best job that he could. Chief Joe Varga described Dean as very energetic. “You couldn’t keep him down, he wanted to get out there and do it, he loved his job, and he loved coming out here”.

P.O. Jarod Dean is the first officer in the village to die in the line of duty. Dean was one of 15 officers in the department.

He is survived by his parents, Thomas and Marie, his sister Carey Ceculski, his step-brother, Dean Rivera, and his older brother John who serves as a police officer in Hudson, Ohio, and whom he had followed into law enforcement. He is also survived by numerous relatives, friends and colleagues who will miss his friendship, enthusiasm, and dedication to duty.

You Can Help Us "Keep The Promise." END_OF_DOCUMENT_TOKEN_TO_BE_REPLACED