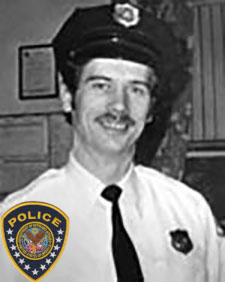 On January 31, 1986, Mark Decker and Leonard Wilcox reported to work at the Brecksville Veterans Administration Hospital. Both officers were armed only with mace due to administration policy that contended carrying guns would encourage more problems.

Army veteran, Justin A. Claytor was medically discharged from the service due to severe headaches. Claytor also claimed he suffered from radiation poisoning. In 1985 Claytor was diagnosed as a paranoid schizophrenic. The hospital’s evaluation reported Claytor was not a threat to himself or others.

Wanted for shooting an unarmed security guard and a customer at a Lawson’s Milk Store in Cleveland, Justin Claytor and a man named Gary Powell entered the V.A. Hospital at approximately 5:30 pm.

Claytor led Powell around the facility, they watched television in a waiting room, then a movie in the rec hall. Shortly thereafter, Decker on foot patrol entered the hall at which time Claytor walked away. Powell approached Decker and told him about Claytor. Officer Decker advised him to take Claytor to the admitting desk, to which Powell advised his friend was in trouble with the police and would not be admitted for treatment. Powell rejoined Claytor and they continued to wander about the hospital until Claytor observed Powell attempting to pass a note to a hospital employee. Claytor destroyed the note and talked Powell into leaving the building.

After talking to Powell, Officer Decker contacted his supervisor advising two black males were enroute to the admissions office and one should be treated with “kid gloves.” When the men failed to show, the supervisor requested Decker and Officer Wilcox find the men.

At 7:08 pm, the officers spotted the males next to Building #6. When Decker asked the males for photo ID’s, Claytor responded, “I’ll show you some I.D.” and produced a 45 caliber semi-automatic handgun, hidden under his coat. Decker stepped back, Claytor pointed and shot him twice in the face, killing him instantly.

Claytor turned and shot Wilcox in the arm and chest then chased him down to parked vehicle where Wilcox tried talking Claytor into dropping his gun. Instead, Claytor pointed the gun at Wilcox and pulled the trigger. The gun jammed and he tried to clear it, Wilcox took the opportunity and began running. Wilcox slipped and fell and as he tried to regain his footing, Claytor cleared the jam and caught up to him. Clayton shot Wilcox in the face and he fell face down in the snow. Claytor ran into the building while Powell ran into the nearby woods where he was found hiding.

Responding Brecksville officers arrived and found Officer Decker lying face up where he had fallen. Officer Wilcox was found a short distance away. Both Officer’s were pronounced dead at the scene.

Claytor was captured a short time later attempting to hold a V.A. patient hostage. He currently is serving two life sentences for the murders of the two officers.

Mark Decker graduated from high school in 1975, and served in the United States Air Force as a military policeman before becoming a federal policeman. Decker was single and had hoped to become a Cleveland policeman.

You Can Help Us "Keep The Promise." END_OF_DOCUMENT_TOKEN_TO_BE_REPLACED