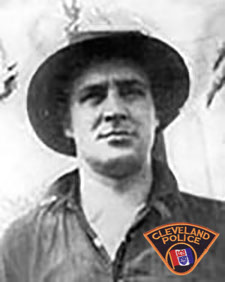 Patrolman George Effinger died at St. Alexis Hospital of a bullet wound to one of his lungs. He had been a member of the police department about one year.

Patrolman Effinger, along with Patrolman Wieczorek and three other officers, responded to a call that Paul Jaworski, a known and wanted criminal was at a restaurant located at 6518 Fleet Avenue.

The five officers went to the restaurant and although they had not drawn their guns, were greeted by gunfire from Jaworski. Effinger was shot in the lung and died some time later as a result of the injury. His partner, Patrolman Wieczorek was shot four times and died shortly after the shooting.

You Can Help Us "Keep The Promise." END_OF_DOCUMENT_TOKEN_TO_BE_REPLACED