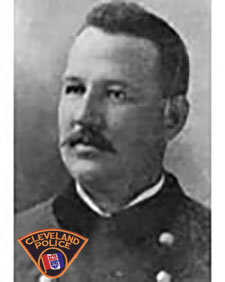 The fatal shooting occurred when a fight broke out between striking union molders and non-union men who were brought in to work the striking molders’ jobs. When the fight broke out, shots were fired. At the time, Detectives Foulks and Parker were inside an area building looking for a subject wanted by police. Hearing the shots, the detectives ran outside, observed the gun battle and fight in progress and ran towards the fight.

Detective Foulks was described as a big and powerful man and when he reached the crowd, he immediately grappled with Charles Peck and took him to the ground. Foulks fell on top of Peck and in the course of the struggle, Foulks revolver fell from his holster at which time Peck grabbed the revolver and shot Foulks.

When the fight ended, two other men were seriously injured and later died from their injuries. Additionally, one man was badly beaten and three others sustained gunshot wounds. Foulks was the only policeman killed in the incident.

Several men were arrested in connection with the incident. Charles Peck was the only one charged with Foulks’s murder. After shooting Foulks, Charles Peck ran to a nearby livery stable with Patrolman W. J. Thorpe in pursuit. Peck was arrested at the livery stable and at the time of his arrest, Patrolman Thorpe found Foulks’ revolver with four spent cartridges in Peck’s possession. At the trial, Peck was acquitted of murdering Detective Foulks.

According to newspaper articles, police were of the opinion that Charles Peck had no way of knowing that Detective Foulks was a police officer since Foulks was in plain clothes. Charles Peck was one of several men who was attacked at the onset of the fight and claimed to be defending himself from injury.

Detective Foulks came to Cleveland from Canton, Ohio. At the time of his death, Foulks was a member of Forest City Lodge No. 388 F and AM.

On October 3, 1900, A Masonic funeral service was held at the Foulks’ residence on Marcy Avenue (now E. 86th Street) in Cleveland. Detective Foulks’ body was transported to the Village of Moultrie in Columbiana County Ohio, for burial at Moultrie Cemetery.

You Can Help Us "Keep The Promise." END_OF_DOCUMENT_TOKEN_TO_BE_REPLACED