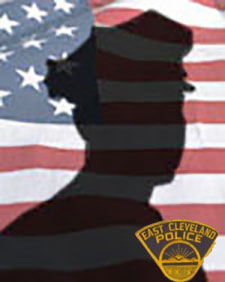 Patrolman Patrick Gaffney was appointed to the East Cleveland Police Department on March 15, 1911, and was a well- respected officer throughout his career.

On December 18, 1918, Patrolman Gaffney, along with his partner Captain Patrick Hendricks responded to the Elm and Coit Road area for two males attempting to steal an automobile from a garage.

Upon arrival, suspects immediately opened fire and approximately seventeen shots were exchanged in the ensuing shootout. One of the bullets struck Captain Hendricks’ flashlight wounding him slightly. During the chase, another bullet struck Patrolman Gaffney in the right lung, an injury which proved to be fatal.

Cleveland and suburban police were notified who began searching for the suspects believed to be wounded during the earlier gunfire exchange.

In June of 1919, John Grogan, the alleged triggerman, was found guilty of second-degree murder and was sentenced to life in prison.

Patrick Gaffney was a native of Ireland. He was married and it is not known if there were any children. Services were held at Flynn Froelk and internment was at Calvary Cemetery.

You Can Help Us "Keep The Promise." END_OF_DOCUMENT_TOKEN_TO_BE_REPLACED