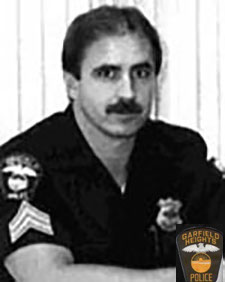 August 14th, 1994, will be forever remembered as one of the most tragic and traumatic dates in the history of the Garfield Heights Police Department. Sgt. Dennis Glivar a 17 year veteran of the Police Department, was fatally wounded in a hail of gunfire after being ambushed by a cowardly assassin.

Sgt. Glivar will always be remembered by his wife Debbie as a loving husband who was always at her side. They were inseparable mates who did everything and went everywhere together. Sgt. Glivar was the strong and silent type; who never boasted about his mastery of the martial arts or the Gold Medal recently awarded for weightlifting in a local police tournament. He was a well respected supervisor who always treated his subordinates fairly and led them by example.

On that fateful day in August, Sgt. Glivar and his partner Lt. Kaiser, responded to the call of a male firing a weapon in the parking lot of an apartment complex in the City of Garfield Heights. While en-route to the call, they were further advised a male had been shot at that location and Ptl. Cermak, was under fire from the suspect.

Upon arrival, Sgt. Glivar and Lt. Kaiser were told the suspect fled around the rear of the apartment building after he fired at Ptl. Cermak. Bystanders also stated the suspect shot a man who was now in one of the second floor apartments.

When Sgt. Glivar and Lt. Kaiser reached the first floor landing, the suspect, Harry Mitts, flung open his apartment door and fired a shower of bullets at the two officers. Harry Mitts fired a 44 magnum revolver with his right hand and a 9 mm pistol with his left. Sgt. Glivar was shot 7 times in his torso, and, as testament to his strength and fortitude, he still managed to stumble down the hall where he collapsed and died at the rear door.

Lt. Kaiser was shot in the chest and the right hand and managed to return fire and shoot Harry Mitts twice in the hip and the foot. Despite his wounds, Harry Mitts continued to hold the police at bay for the next five hours and was eventually taken into custody by the S.W.A.T. team.

On Thursday, August 18, 1994, funeral services were held at St. Leo the Great Church, and Sgt. Glivar was laid to rest at Holy Cross Cemetery. Thousands of police officers from the local area and as far away as Pittsburgh, Pennsylvania, attended this solemn affair.

On October 19, 1994, Sgt. Glivar was posthumously awarded the Purple Heart and the Medal of Honor in a ceremony honoring him and other fellow officers for their courage and commitment to duty. Sgt. Glivar’s wife Debbie was presented with these awards along with a plaque and proclamation honoring, her husband.

On November 17, 1994, Harry Mitts received the death penalty and was sentenced to die in the electric chair on August 14, 1995.

You Can Help Us "Keep The Promise." END_OF_DOCUMENT_TOKEN_TO_BE_REPLACED