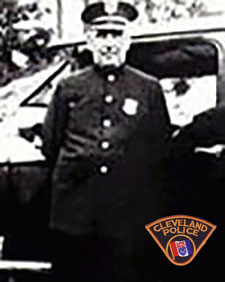 Patrolman James Goggin was a nineteen year veteran of the Cleveland Police Department joining in 1920. For several years he was assigned to the Eleventh Precinct at East 105th Street and Euclid Avenue as a scout car driver. James Goggin was the fifty-eighth officer to die in the line of duty.

January 13 1939 was a typical work day for Officer Goggin and his partner, Nick Sennish as they investigated a burglary at Cedar Avenue and East 77th Street. At 9:41 am an A.D.T. alarm flashed at Central Station indicating trouble at 71st Street and Central. Radio dispatchers called another car for alarm but Goggin informed Dispatch they were nearby and would answer the call.

Dispatch could not give an exact alarm location so Sennish checked the Kaygee Drug Company on Central Avenue while Goggin checked the Sach Store. As Goggin entered Sach’s, he came across a subject holding a knife to the throat of Isadore Sach who was ordering him to find “more” money in the safe. At the same time another subject was ordering people to the basement. One of the men started shooting, striking Goggin in the stomach and left side. As Goggin fell to the aisle floor, the male ran to an exit. Goggin was able to shoot at a second male who he ran past him. The male got as far as the street and fell dead at the curb, two others escaped.

Officer Sennish heard the shots but by the time he reached the store, the subject who killed Goggin escaped. He saw the fallen robber ran into the store and found Goggin. He called to him but Goggin did not answer. Sennish returned to the zone car and called for an ambulance. This call was recorded at 9:45 am just four minutes after the initial A.D.T. alarm. It took only four minutes for two men to lose their lives.

Description of the robbers was aired. One was described as being a black male about nineteen years old wearing a dark grey cap, dark trousers with a light stripe, and a red sweater coat under a blue Chesterfield overcoat.

The other was described as a black male about twenty years old, sporting a hair-line mustache, wearing a blue overcoat and brown soft hat answering to the name of “Babe”. Both men were arrested.

Goggin left behind his wife Ann and four children, James, Jr., 17, Mary, 11, Nancy, 9, and John, 4. Officer Goggin was buried in Calvary Cemetery following a solemn high Mass of requiem. His gun, badge and uniform were taken to Central Station and his badge was mounted in his honor.

You Can Help Us "Keep The Promise." END_OF_DOCUMENT_TOKEN_TO_BE_REPLACED