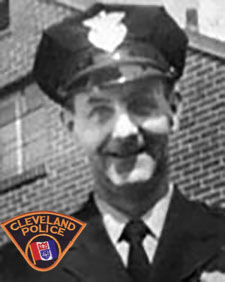 One hundred ninety-one dollars and fifty-three cents. This is the price that was paid for Bill Greller’s life.

Bill Greller, 34, husband to Lenore and father to four young sons, Sean, 8, Bill, 4, Mike 2, and Patrick, eight months, was a six year veteran of the Cleveland Police Department, a career he had wanted since the time he was a child. The robber who shot and killed Bill Greller on September 18, 1964, didn’t think of these people. The robber, while foiled in his attempt to steal one hundred ninety-one dollars and fifty-three cents, succeeded in stealing this woman’s husband and the boys’ father. He stole future memories, holidays and birthdays together. He stole days of playing catch by father and sons. He stole the happiness of growing old together.

Patrolmen Greller and John C. Delaney were called to a routine investigation regarding a theft of a package of meat from the A. and G. Meat Company, 7312 Wade Park Avenue on Friday, September 18, 1964, at 3:56 p.m. By coincidence, a robbery was in progress in the office of the meat company when the officers arrived. As Greller walked into the office, he was shot at point-blank range by the robber, Earl M. Jones, 20, who was surprised by the policeman. As Delaney started to draw his gun, he was shot in the right arm, numbing it. Switching his gun to his left hand, Delaney emptied his gun at Jones, who was firing from about five feet away, until Jones fell to the floor. Patrolman Greller died at 9:27 p.m. from extensive bleeding caused by two chest wounds. The robber was killed by Delaney’s shots. Delaney, after a four-month recuperation period for broken ribs and a punctured lung, returned to work in Cleveland’s Fifth District. The employees and owner of the meat company were not harmed.

This robber could never realize the pain and agony his actions would inflict. It is doubtful that after the initial shock, society thought much about it. After all, that’s police work; you take your chances. But in police work, it is for the citizen that chances are taken, and the stakes can be as high as an officer’s very life. Society forgets that Bill Greller, husband and father, had the kind of concerns that face everyone. He woke that Friday morning, painted his garage, dressed, kissed his wife and children good bye and went to work. Yet work for him separated him from others. His job was to protect the lives and property of his community. He put on a uniform and strapped a gun to

His waist, not knowing that by that very afternoon he would lay down his life to protect the lives of two citizens being robbed at gun-point.

It is time to remember the events of September 18, 1964, and the events of every other day when officers lay their lives on the line to protect our community. It is time to recognize the debt owed not only to Bill Greller but also to his family and the families of other police officers who died serving the Greater Cleveland area. The Greater Cleveland Peace Officers Memorial is where we begin.

You Can Help Us "Keep The Promise." END_OF_DOCUMENT_TOKEN_TO_BE_REPLACED