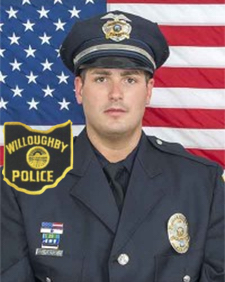 END OF WATCH: September 21, 2012
Willoughby Police Department
Age: 32
On Friday, September 21, 2012 at 9:35 PM, Willoughby PD Police Officer Jason Gresko was killed in a motor vehicle accident on Harmony Lane in that city. PO Gresko was responding in his police car with lights and siren in operation to assist another officer with a disruptive prisoner at Lake West Hospital. His police car collided with a pickup truck turning left into a driveway, failing to yield the right of way to the oncoming police car. After dash cam review it was determined he swerved to avoid the truck, knowingly putting himself in harm’s way to protect the four citizens in the truck. The force of the collision spun the patrol vehicle around and it slammed into a tree. He was transported to Lake West Medical Center where he succumbed to his injuries. The members of the other vehicle were uninjured.

He is survived by his wife Sandra Mae and daughter Olivia Mae.

On Thursday, September 27, 2012 over 1,000 fellow officers from throughout Ohio and surrounding states joined in support of his family, friends and coworkers to render Jason a full honors funeral. A memorial service was held at Monreal Funeral Home in Eastlake. A procession of over 350 police vehicles and family cars escorted him to his final rest at All Souls Cemetery in Chardon.

We extend our condolences to Jason’s family, friends, and fellow officers with the Willoughby and Cleveland Clinic police departments.

You Can Help Us "Keep The Promise." END_OF_DOCUMENT_TOKEN_TO_BE_REPLACED