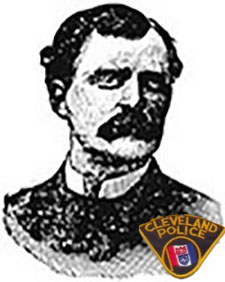 It was 1887, Cleveland was growing by leaps and bounds and crime was on the rise. To make matters worse, the “Blinky Morgan Gang” had arrived in town, making their presence known through a series of burglaries and safe jobs. One of the last and largest efforts committed by the gang was a burglary at the Benedict and Ruedy Fur Store at Superior Avenue and Seneca Street (now West 3rd Street). Six thousand dollars’ worth of sealskin pelts were stolen. The pelts found their way to Pittsburgh as did Mat Kennedy, alias Kid McMunn, a member of the gang. The Kid was arrested and was waiting to be transported back to Cleveland for questioning.

Captain Henry Hoehn and Detective William Hulligan were detailed to bring back the prisoner by train. The two policemen and their charge boarded the train in Allegheny City at midnight. The prisoner was handcuffed to Hulligan. Hoehn and Hulligan watched carefully as passengers boarded at each station lest “Blinky” attempt to rescue his lieutenant.

In Alliance, three men boarded, one carried a long package wrapped in newspaper under his arm. They rode on the rear platform outside of the train for a while and as the train pulled into Ravenna, they entered the smoker where Hoehn and Hulligan sat with their handcuffed prisoner. Hoehn looked up into three faces and three guns. One of the men struck Hulligan with the newspaper-wrapped package (later learned to be a coupling pin) on the head. Hoehn rose and attempted to draw his gun and the three men opened fire. Hoehn returned fire, emptying his gun. Hulligan was beginning to stir again and was immediately struck again with the same package. Hoehn, his gun empty, was also beaten senseless. The bandits freed their friend and fled. Hulligan died a few days later. Hoehn was near death but recovered. Morgan, wounded by four bullets, hid out in Pittsburgh while he recovered, he later moved to Alpena Michigan where he was captured and returned to stand trial for Hulligan’s death. He was convicted and on August 3, 1888, Charles “Blinky” Morgan was hanged in the Ohio State Penitentiary in Columbus.

After Morgan was hanged, the members of the gang spread out over the country and most met violent ends. Tom Rowlands and Eddie Roach were shot in a gun battle with police in Shelby, Ohio.

Mike Coleman was killed while resisting arrest in Illinois, and Kennedy, the escapee, was killed in 1905 by a policeman in Berkeley California.

Tom Scott was killed by Cleveland Patrolman James J. Doyle as Scott and two others attempted to rob the South Cleveland Bank in order to obtain money for “Blinky” Morgan’s defense fund. The last of the gang, which numbered fifteen in its heyday, went behind bars in 1912.

You Can Help Us "Keep The Promise." END_OF_DOCUMENT_TOKEN_TO_BE_REPLACED