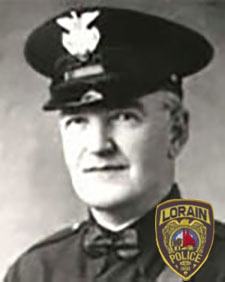 Patrolman George Kirk began his career with the Lorain Police Department on March 13, 1919. He died on March 30, 1944, when he fell into an open elevator shaft.

Following is an editorial from the Lorain Journal dated March 31, 1944: “The police department, the City and the cause of dignified law and order lost more than a good servant through the accident that cost Kirk’s life; they lost a good friend.”

From 1922 to 1927 Kirk served as a detective. He returned to patrolman in 1927 and served as a night patrolman working his beat on foot. In May, 1943, he captured two men who were burglarizing the Lorain Moose Lodge. Kirk shot one of the burglars during this arrest.

On March 30, 1944, Kirk was on his customary night beat making rounds in the business section of downtown Lorain. He made his last report to headquarters at 2:30 a.m. When Kirk failed to make two later periodic call-ins, two police cars were detailed to search for him. Police found an open door at a hardware store that led directly to an elevator shaft. Kirk’s body lay face down at the bottom of the shaft, he was apparently killed instantly. The investigation concludes that Officer Kirk found the door unlatched, opened it and stepped in, falling ten feet to his death.

Kirk was a member of The Knights of Pythias, The Brotherhood of Railroad Trainmen, and The Fraternal Order of Police. He was survived by his wife Maude, daughter Mrs. Theodore Walker, three half-sisters and three half-brothers.

You Can Help Us "Keep The Promise." END_OF_DOCUMENT_TOKEN_TO_BE_REPLACED