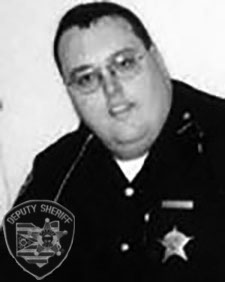 The Cuyahoga County Sheriff’s Office was established on May 9, 1810. In the 191 years of the Sheriff’s Office, we can find no documentation of a deputy sheriff losing their life in the commission of their duty.

On February 17, 2001, that all came to an end when Deputy Sheriff James M. Salvino, Jr. lost his life as a result of injuries sustained in an automobile accident the day before.

On February 16, 2001 Deputy Salvino and his partner Deputy David W. Miller #211 were assigned to travel to Lima, Ohio to drop off a prisoner at the Lima Correctional Institution and pick up another and return that prisoner to the Cuyahoga County Jail in Cleveland.

While returning to Cleveland via I-75 the sedan, being driven by Deputy Salvino, struck a guard rail then traveled sideways across four lanes of traffic before colliding with a tractor trailer also going northbound. The sedan with the deputies was dragged under the trailer a short distance before being ejected.

Despite the valiant efforts of the State Highway Patrol, Allen County Sheriff’s and City of Lima Police and Fire Rescue, Deputy Salvino succumbed to his injuries the next day after being life flighted from Lima Memorial Hospital to the Toledo Medical Center. After a lengthy hospital stay Deputy Miller was released and is expected to return to duty.

Following in the law enforcement footsteps of his father James Salvino Sr., retired deputy sheriff, and his mother Joanne, a Cleveland Police dispatcher, he joined the ranks of the Sheriff’s Office in 1993 as a correction officer, later becoming a deputy sheriff in 1997.

This program allows first time offenders having misdemeanor offenses the opportunity to have those matters handled at the local level in hope of steering them away from more serious crimes and to help alleviate the over crowding at the main juvenile complex. Deputy James M. Salvino, Jr. felt that this program was not just another outlet for the justice system but a way to reach out to the youth of this community.

He is deeply missed by all who knew him. His wife Amanda Salvino survives him.

You Can Help Us "Keep The Promise." END_OF_DOCUMENT_TOKEN_TO_BE_REPLACED