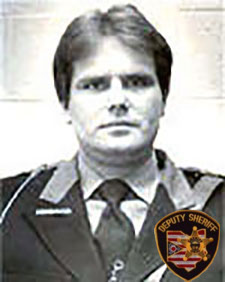 July 3, 1979, Deputy Tomazewski pulled over a 15 year-old for a traffic violation. The youth advised he did not have his driver’s license with him and asked the Deputy to follow him home to get it. The officer followed the youth to his home on Griggs road, southwest of Wellington. They both went inside at which time the youth grabbed a .22 caliber rifle and shot Deputy Tomazewski in the chest. The Deputy fired three rounds however, the boy was not injured. Tomazewski staggered out of the house and collapsed on the driveway where a neighbor called the police.

Shortly after 8:00 pm, officers from police departments throughout Lorain County responded to the scene. Tomazewski was transported to the emergency room at Wellington Community Hospital, then transferred to Elyria Memorial Hospital where he was pronounced dead on arrival.

Did a kind act lead to the slaying of the Deputy? Authorities theorized the officer was apparently trying to give the young traffic violator a break. Normally motorists are arrested on the spot if they cannot produce a license.

After a search by police and deputies, the youth was found hiding in a field near his home. At first, he denied the shooting but after further questioning, there were strong indications the boy was lying. The youth was convicted and sent to a juvenile detention center until his 21st birthday, when he was released.

Officer Tomazewski was survived by his parents, Andrew and Theresa; sister, Debbie; brother, Michael; and a maternal grandfather.

You Can Help Us "Keep The Promise." END_OF_DOCUMENT_TOKEN_TO_BE_REPLACED