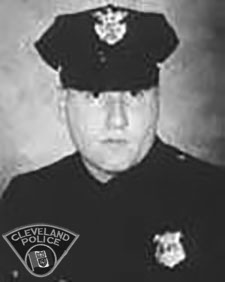 On January 6, 1992, Detective Robert J. Clark began his career with the Cleveland Police Department and throughout his six years on the department, Detective Clark received numerous citations for acts of bravery and distinguished service.

On July 1, 1998, while assigned to the First District Vice Unit and in company with Vice Detectives Keith Haven and Ray Diaz, Detective Clark was shot and killed.

On that date, the three Detectives observed a drug transaction and pursued a suspect into a stairway at 10010 Madison Avenue. While effecting the arrest, a struggle ensued and Detectives Clark and Diaz were pushed down a flight of stairs. The suspect fired at Detectives as they fell defenseless down the stairs. Detective Clark was struck four times sustaining wounds ultimately proving fatal. Detective Haven returned fire, killing the suspect.

Age: 36
Badge# 545
Rob Clark never hesitated for a second to pursue this armed criminal, displaying the extraordinary courage that had become his trademark. These valiant efforts were typical of his approach to not only his vocation but his entire life. Detective Clark never once yielded to the strong but sided with the weak.

On Wednesday evening July 1, 1998, Robert Clark made the supreme sacrifice for his fellow man. At 11:05 pm he was struck down while trying to make the world a gentler place. At 11:52 pm, he left this world and we are all diminished by his passing.

A memorandum written by Detective Clark.

You Can Help Us "Keep The Promise." END_OF_DOCUMENT_TOKEN_TO_BE_REPLACED