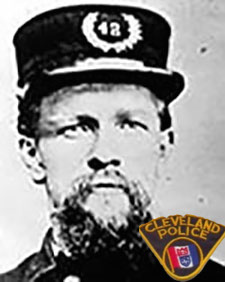 A gang of six, recently arriving from out of town had taken up lodging at the “Wacht Am Rhein” saloon located at the south end of Pearl Street which is now W. 25th. The gang being suspected of burglaries was placed under surveillance and two days later on May 13, 1875, a stake-out was initiated to capture them.

Officers Kick and Floyd, attired in civilian clothes were posted near the saloon and directed to watch the gang’s every move. Detective Theo Labscher led a squad of six additional officers from the 4th precinct and posted them some distance from the saloon so that no disturbance would arise and that the arrests would be peaceful.

When the gang left the saloon some confusion arose because the suspects actions were not as they had been the two previous nights. As the gang moved through the streets, Kick and Floyd became separated from the rest of the squad.

They soon met up with fellow squad member, Officer Hildebrand in the area above Franklin Circle with the desperados just ahead. The gang then separated into three groups of two, Kick thinking the rest of the squad was just behind them planned he, Floyd and Hildebrand would each take a pair of desperados.

The gang was accosted and a verbal row ensued, the gang bestowing the strongest epithets upon the officers and telling them to mind their own business. Before long, near the corner of Franklin and Kentucky (W. 38th) Streets just opposite the reservoir, the gang opened fire on the officers standing in the open street. The three officers stood their ground and returned fire as the gang ran, firing at each step. A ball fired from the gang leader’s pistol Struck Officer Kick in the chest as he stood in the middle of the street.

By this time, area residents awakened and gathered at the scene of the tragedy, some assisted the wounded officer and others began searching for the criminals. Citizens throughout the city felt a deep indignation and great dismay that an event such as this could take place in the open street. The shooting served to unite citizens and officers. Large crowds gathered at various points of interest in search of the outlaws, and in the excitement, had the murderer been caught, a determined effort would have been made to hang him from the first handy lamp post.

Members of the gang were later arrested, but this crime was never proven against them.

Officer Michael Kick, a man in the prime of his life, a member of the force since its organization on the metropolitan plan in 1865, was described as a quiet, faithful, brave and fearless officer. His gentlemanly deportment and strict attention to duty earned him the respect of his fellow officers and all who knew him. Kick lived on Myrtle Avenue with his wife and four children. The photograph of Officer Kick was provided by his grandson.

You Can Help Us "Keep The Promise." END_OF_DOCUMENT_TOKEN_TO_BE_REPLACED