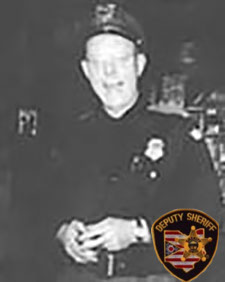 On August 13, 1956, at approximately 10:15 p.m. Deputy Sheriff Howard ‘Jack’ Scott of the Geauga County Sheriff’s Office, was struck by a drunk driver while directing traffic on Route 43 in Bainbridge Township, Ohio.

Deputy Scott was transported to Marymount Hospital with severe injuries and was was pronounced dead on arrival.

Deputy Scott was survived by his wife of 25 years, Alice and their two children, Richard and Audrey.

You Can Help Us "Keep The Promise." END_OF_DOCUMENT_TOKEN_TO_BE_REPLACED