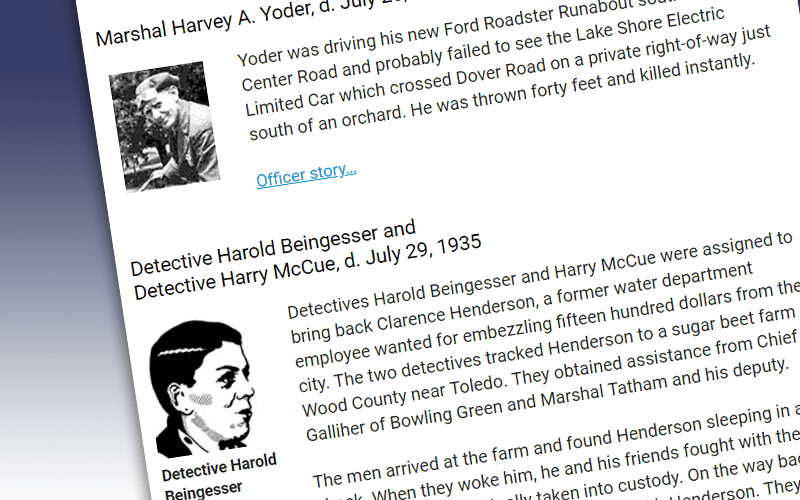 Remembering officers who have died in Julys past…. we have their stories from the oldest fatality, Marshal George Brenner, d. July 16, 1883, to the most recent, Police Officer Joshua T. Miktarian, d. July 13, 2008.

On the late evening of July 17, 1883 Wellington Marshal George Brenner was made aware of suspicious men in the area of Houghtons Drug store. Marshal Brenner watched the men from Footes Stable and saw them enter the alley behind the Union Block. Brenner first returned to his nearby apartment to exchange his slippers for his boots then left to attempt an arrest. Followed by his wife, who was concerned for his safety, Brenner entered the alley from the opposite end. The next thing heard was the shooting near the C.C.C. & I Freight Depot.

Deputy Gray and Marshall Maloney went on a search for the driver or drivers of a stolen car. As the deputies were approaching Sheehan’s Hill (Plains Rd.) they passed two men eating cookies out of a bag, one wearing a long driving coat, and the other was carrying his over his arm. They decided to investigate, so Gray put the car in reverse and backed up. As he was backing the car, the bandits noticed the guns the deputies were carrying. One bandit opened fire and a fierce gun battle took place. When the smoke cleared, there was one dead and 2 wounded. Gray had been fatally shot in the head, Gilmore received a flesh wound to the head, and McCarthy was shot through the back.

On July 12th, 1920 in the early morning on Whiskey Island, Cook was working in the area belonging to New York Central Rail Road. He was patrolling near the ore docks and railroad yards when he was shot and killed by one of two men he was attempting to search and question, believing that they were boxcar robbers.

Yoder was driving his new Ford Roadster Runabout south on Dover Center Road and probably failed to see the Lake Shore Electric Limited Car which crossed Dover Road on a private right-of-way just south of an orchard. He was thrown forty feet and killed instantly.

Detectives Harold Beingesser and Harry McCue were assigned to bring back Clarence Henderson, a former water department employee wanted for embezzling fifteen hundred dollars from the city. The two detectives tracked Henderson to a sugar beet farm in Wood County near Toledo. They obtained assistance from Chief Galliher of Bowling Green and Marshal Tatham and his deputy.

The men arrived at the farm and found Henderson sleeping in a shack. When they woke him, he and his friends fought with the officers and was eventually taken into custody. On the way back to Cleveland, Beingesser drove while McCue rode in the back with Henderson. They were traveling on State Route 18 when they failed to stop before entering State Route 25. Their vehicle was struck by another vehicle traveling southbound on Route 25.

Five people died as a result of the accident, Detectives Beingesser and McCue, the prisoner Henderson, and two passengers from the second vehicle.

Matthew Bubich, a 48 year old psychopathic patient, escaped from the Elmwood Sanitarium. Bubich escaped by removing the screen from the second floor window and climbing down the fire escape. Dressed in pajamas and slippers, Police presume he walked to his butcher shop in the Flats where his wife and daughter lived.

He asked for clothes and Anna brought him underwear, a shirt and a pair of pants. He became angry when she could not find a belt for the pants. He went to the back of the butcher shop and emerged with a sixteen and one-half inch butcher knife. He warned his family to keep still or he would kill them, changed his mind and told them to leave the room, and locked the door behind them. The upstairs neighbors heard the commotion and called the police. Patrolman Wehagen obtained the door key from Mrs. Bubich and unlocked the door. As Wehagen pushed it open and entered, Bubich thrust the knife into his abdomen.

Ledwick drove while Mlakar rode the back bumper, it was standard procedure for the second officer to ride as rear guard to the prisoners. As the “Paddy Wagon” traveled west on Quincy, it was struck by a bakery truck traveling north on East 71st Street.

The impact overturned the Paddy Wagon and Mlakar was thrown onto the pavement. Mlakar was rushed to Poly Clinic Hospital where he was treated for a fractured skull, fractured right leg, and internal injuries. At 10:14 pm Patrolman Louis Mlakar died as a result of his injuries.

Independence Police investigating a holdup of the local Howard Johnson’s restaurant left for Cleveland to check on two suspects. As was customary, Valley View police covered the village for Independence police when necessary.

Patrolmen Robertson and partner Patrolmen Gabram shifted into Independence. While on Brookside Road, they observed a parked car and stopped. Officer Robertson walked toward the car and without warning, was cut down by a 12ga shotgun blast.

On July 28, 1965 Deputy Lummie Sanders was involved in a three-car accident on Mayfield Road which ended his life.  At 4:05 am, Deputy Lummie Sanders and Deputy Eugene Baker were eastbound on Rt. 322, responding to a domestic call when a westbound vehicle pulling into a gas station made a left turn in front of their cruiser. Deputy Baker attempted avoiding hitting the car and skidded into another westbound vehicle. The impact ejected both deputies out of the cruiser. Deputy Baker sustained serious head injuries, however Deputy Sanders died instantly.

On the evening of July 23, 1968, Cleveland Police Officers, Louis Golonka and Williard Wolff, and Lieutenant Leroy Jones were killed following their response to an “all units” call to a gun battle along Lakeview Avenue between Beulah Avenue and Auburndale. Between 8:30 p.m. and 10:00 p.m. seven people lay dead and fifteen others wounded, ten of whom were police officers. This was the first of five days of racial violence in Cleveland’s Glenville neighborhood.

Patrolman Murray, a thirty-two year veteran of the police department, was off duty at 11:45 p.m., July 2, 1975, when he stopped at the Spaghetti Inn at 6922 Wade Park to visit the owner, Gilbert Kelley. Murray had just arrived when the side door opened and the two Kaiser brothers entered with weapons drawn announcing a stick up.

Murray exchanged shots with the robbers and staggered towards the front door and dropped dead. The robbery was aborted with one brother assisting the other to their car.

Deputy Tomazewski pulled over a 15 year-old for a traffic violation. The youth advised he did not have his driver’s license with him and asked the Deputy to follow him home to get it. The officer followed the youth to his home on Griggs road, southwest of Wellington. They both went inside at which time the youth grabbed a .22 caliber rifle and shot Deputy Tomazewski in the chest.

On July 3, 1980, at 2:15 am, Detective Sherry observed a robbery in progress while passing through the area of East 66th and Euclid on his way home after a tour of duty at the Sixth District. Officer Sherry did what every good policeman does and stopped to investigate. Four juveniles quickly approached Sherry’s car. One of the juveniles pulled a .32 caliber handgun and shot Sherry fatally in the face, then took his badge case.

On July 1, 1998, while assigned to the First District Vice Unit and in company with Vice Detectives Keith Haven and Ray Diaz, Detective Clark was shot and killed.

On that date, the three Detectives observed a drug transaction and pursued a suspect into a stairway at 10010 Madison Avenue. While effecting the arrest, a struggle ensued and Detectives Clark and Diaz were pushed down a flight of stairs. The suspect fired at Detectives as they fell defenseless down the stairs. Detective Clark was struck four times sustaining wounds ultimately proving fatal. Detective Haven returned fire, killing the suspect.

Early in the morning of July 13, 2008, Officer Miktarian stopped a vehicle on Glenwood Drive just west of State Route 91 for a loud music violation and suspicion of drunk driving. Very shortly after calling in the license plate, Officer Miktarian requested backup. Seconds later, the Twinsburg Communications Center received a phone call from a resident who lived near where Officer Miktarian was conducting the traffic stop. The caller reported hearing loud yelling and loud popping noises coming from outside her residence.

Dispatchers immediately attempted to reach Officer Miktarian on the radio but received no response from him. Officers from several jurisdictions responded and upon arrival at the scene observed Officer Miktarian lying on the ground next to his cruiser with Bagio still inside the car. They discovered that Officer Miktarian had sustained multiple gunshot wounds to his head.

You Can Help Us "Keep The Promise." END_OF_DOCUMENT_TOKEN_TO_BE_REPLACED